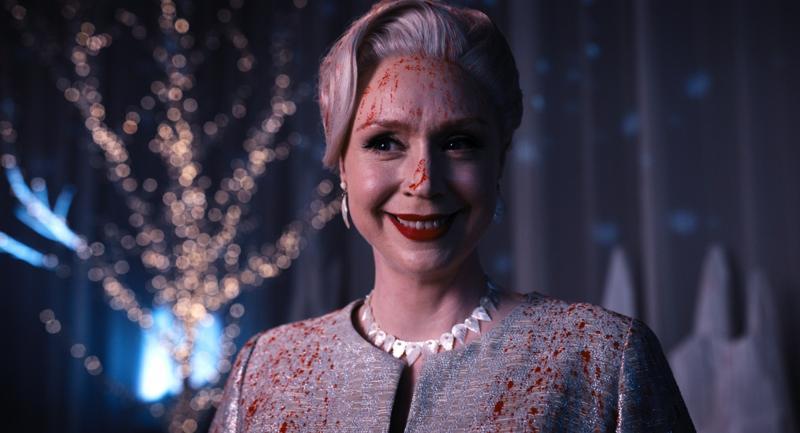 While we’ve met plenty of the Addams Family so far in trailers for Netflix’s new spin-off series ‘Wednesday’, there was one main character who had yet to be revealed. The streamer used the New York Comic-Con to unveil Uncle Fester, here played by Fred Armisen.

In typical Fester form, he’s a bald, pale sort whom Wednesday (Jenna Ortega) initially suspects might be a threat, but is delighted to discover it is, in fact, her uncle. And though he claims to be traveling incognito, we’re not sure a dalmatian-spotted motorbike exactly lives up to that concept.

With Ortega as the titular central character, ‘Wednesday’ charts her years as a teenager, albeit one who still favors dark tones and ice-cold seriousness.

As for the rest of the family, we have Catherine Zeta-Jones as Morticia, Luis Guzmán as a Gomez who hews more closely to Charles Addams’ original comic strip version and Isaac Ordonez as brother Pugsley, the target of many of Wednesday’s schemes (though she will fiercely defend him as needed, too).

‘Wednesday’, which of course draws from Addams’ work, sprung from the minds of ‘Smallville’ duo Alfred Gough and Miles Millar, who decided on a new direction. And while they never expected to, they secured the ideal creative partner in Tim Burton, who agreed to executive produce and direct the series.

“He was interested in where it was going, the mystery of the show,” Gough tells Vanity Fair. “He had a lot of questions about the previous television work we’d done, like how we were able to achieve it. He really loved that you had time to be with Wednesday and explore the character and you didn’t have to wrap things up in an hour and 45 minutes.”

‘Wednesday’ is described a sleuthing, supernaturally infused mystery charting Wednesday Addams’ years as a student at Nevermore Academy. Wednesday attempts to master her emerging psychic ability, thwart a monstrous killing spree that has terrorized the local town and solve the supernatural mystery that embroiled her parents 25 years ago — all while navigating her new and very tangled relationships at Nevermore.

Gwendoline Christie, recently seen in ‘Sandman’, is Larissa Weems, head teacher of Nevermore, and apparently no fan of the Addams clan, with an axe to grind stretching back years to her time as a classmate of Morticia.

Also popping up – and providing an unexpected link to the movies – is Christina Ricci in an unknown role. She, of course, famously played Wednesday in 1991’s ‘The Addams Family’ and 1993’s ‘Addams Family Values’. Her character is one of the teachers at Nevermore.

Though it might seem to be prime fodder for Halloween viewing, Netflix has decided instead to go for November 23rd, AKA the day before Thanksgiving. Perhaps the streaming service is looking to give frustrated families something to watch between giant meals? (L to R) Moosa Mostafa as Eugene Otinger, and Jenna Ortega as Wednesday Addams in ‘Wednesday.’ Photo Courtesy of Netflix © 2022. (L to R) Luis Guzmán as Gomez Addams, and Catherine Zeta-Jones as Morticia Adams in ‘Wednesday.’ Photo Courtesy of Netflix © 2022.