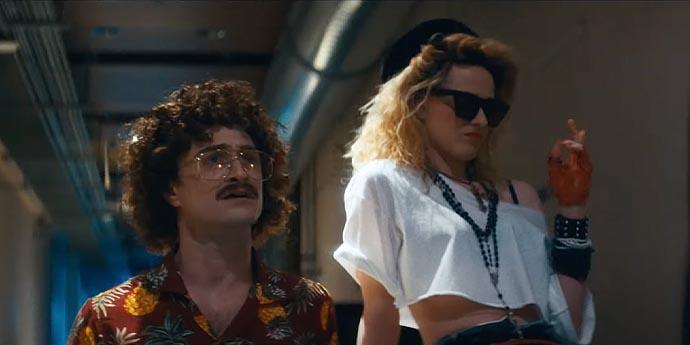 I can’t say I’m a massive fan of Weird Al, but I know him and I do like his work when I see it. When we put up a trailer for the movie, I wanted to give it a go. According to the blurb, this movie:

“…explores every facet of Yankovic’s life, from his meteoric rise to fame with early hits like ‘Eat It’ and ‘Like a Surgeon’ to his torrid celebrity love affairs and famously depraved lifestyle.”

It is loosely based. You know how people embellish stories? They add details that never happened, and kind of exaggerate things? This movie does this and then turns it up to 11.

I’m sure a lot of what took place in the movie did happen, like how his father didn’t want him to sing songs and change the words. I’m pretty sure though Al didn’t have a whirlwind romance with Madonna, only to see her kidnapped by Pablo Escobar, so he had to go deep into Colombia on a murderous rampage to rescue her.

This entire movie is just a parody of his life. I haven’t seen UHF for a while, but it reminded me of that a lot, where there is a story, but pretty sure none of it happened.

This, then, made me laugh at it more. It isn’t a biopic, it’s a massive piss-take of a biopic and I thought it was done really well. In this movie, Al writes Eat It, an original song by him, only to have Michael Jackson ‘parody’ it with Beat It.

The absurdity of the story just keeps going and going and just got funnier as it went on. I won’t spoil the ending, but I loved the closing credits, which start off with images of young Al growing up, but then slowly start to be photoshopped to back up the movie.

Daniel Radcliffe is excellent in this and he is also ripped! Again, I think this was a piss-take since I imagine Al never looked that good! Yankovic turns up in the movie, as do a lot of other great cast members and badly impersonated celebs. Weird: The Al Yankovic Story is based in some form of reality, but none of the events in the movie happened the way they did here. It’s a bloody stupid movie, but what would you expect from a movie by a guy called Weird Al?

I know Shawn said he started watching, but didn’t get into it. I think you have to go in expecting it to be a parody of his own life. I did, and I liked it.